Yellow of the Egg is an independent podcast all about the German language. It was first launched in February 2021 with the aim to explore German language and linguistics, and make it accessible to a wide audience. The podcast is in English, so you don't have to be fluent in German to listen and enjoy!

The idea for the podcast came when Luke (the host) was finishing his studies in German and English. He was already teaching English at a school at the time, but wanted to do something with the German part of his studies too. Before long, Yellow of the Egg was born!

And why "Yellow of the Egg"? There is a German phrase, "das Gelbe vom Ei", which means 'the very best'. Usually you would hear someone say "das ist nicht das Gelbe vom Ei" (=that's not exactly brilliant), but we're making it positive! Following the longstanding tradition of translating German phrases literally (and badly) into English (à la "I believe I spider", "You go me on the cookie"...), "Yellow of the Egg" seemed like the perfect fit! Plus if you are ever in a German-speaking country, you will probably hear someone knowingly say something like "My English is not the yellow of the egg, but it goes!"

Yellow of the Egg is hosted and produced by Luke Green. 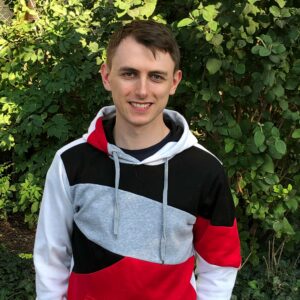 Luke Green is a linguist and language teacher based in Vienna. He studied German and English at the University of Vienna (Mag.phil.) and Music at Canterbury Christ Church University (BMus). He speaks English, German, and a little bit of Spanish. He is also on the executive board of the Austrian Association for Legal Linguistics.